Iowa is a federal-land state, much of the land was acquired from the Government.  The initial plot of land Minnie Creek Brewery was built on was part of that. The Jones county records show the land being first recorded in 1857.  This was likely part of a federal military bounty land warrant used to pay off a military serviceman. 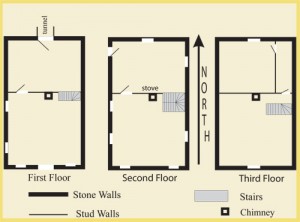 In 1858 John Kohl purchased 1.72 acres of property which is now the west half of the current property. In 1859 he joined with two financial partners John B. Kraus and Wilhelm Romberg. During the following four years, these men built a brewery just outside the Anamosa city limits. This building is now the oldest portion of what was later to become “Rick’s Brewery”.

This building and the later addition were both constructed using native limestone blocks quarried two miles west of the site.  The original three level building had outside dimensions of approximately 18′ by 25′ which provided around 340 square feet per floor.  It was built into the side of a hill which allowed both the first and second floors to have ground level entrances.  An aging tunnel was constructed into the hill to the north of the building.  Limestone construction was used for all exterior walls, the southern exposure was constructed of fine cut ashlar as it was the front entrance.  The remaining walls are constructed of coursed rubble stone.  The floor joists for the second and third floors are oak as well as the roof planks.   Flooring and interior wall studs were pine.  In examining the floor joists, those under the north portion of the second floor show considerable bowing.  This indicates that a large stove or other heavy item had been located there.   This building was also residence for Kohl and his family.