Rick’s Brewery
In 1863 the Jones County Sheriff auctioned off the property now referred to as the “Minnie Creek Brewery” to satisfy a judgment against the three partners.  Orrin Sage purchased the brewery property to resell it the following year to Abram B. Head.  The warranty deed from this sale describes the property as “being the same heretofore occupied by Johan Kohl as a brewery.”   A. B. Head is listed in the Iowa Business Directory of 1865 as operating a brewery in Anamosa, the same year Michael F. Rick purchased the property.  During the following 13 years that M. F. Rick owned the property he borrowed nearly $6000 for improvements.  It was during this time that the building took on the form that it now has today.  Exactly when construction of the large addition was completed is unknown.   There is however a chiseled stone block over the wagon entrance bearing the inscription “1872 M. F. Rick”, which is why it was later called Rick’s Brewery. 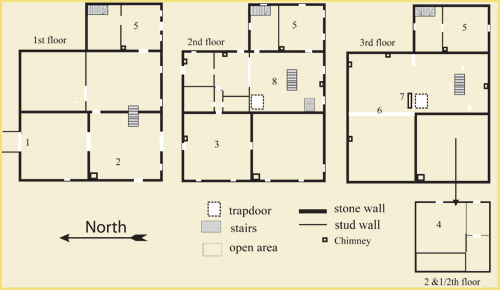 Rick increased the building’s size seven fold by adding a 6000 square foot addition.  The addition was 44′ x 54′ in size with 2000 square feet of usable space on first, second, and third floors.  The third floor comprised of the attic/loft under the hip roof.  Locally quarried limestone was used for all exterior and several interior walls.  The southern exposure or “front” was constructed of rough faced ashlar, and the remaining walls of uncoursed rubble stone.  All floor joists, studs, support beams, and floor planks were of yellow pine.  The entire building was roofed with wooden shingles, and heated by pot belly stoves utilizing seven chimneys.  Three west windows on the existing structure were converted into doors to allow access to the new addition.  A new tunnel was dug into the hill to the north of the addition to provide an even larger “green beer” storage area for the brewery.