The “Old Brewery”
In 1878 the property was again sold at a Sheriff’s sale to satisfy a judgment against Rick.  Shortly after this, in 1882 through 1894 Iowa had its second period of prohibition.  The first period had been 1855 through 1857, ending just a year prior to the construction of the original brewery.  A warranty deed dated 1892 describes the brewery as an “old brewery”, which seems to indicate that the brewery was no longer a commercial entity at that time.  Stories have it that subsequent owners brewed their own personal stock as late as the 1940’s.  At the time of this writing there is no documentation to support it.

There were many changes made to improve the interior.  The inside of the stone walls were studded over and covered with  lath and plaster.  The stairways were moved, and the floor openings for the winch were covered over.  A large kitchen and a bath room were added to the northeast section.  This is evidenced by the use of wire type lath nails in these areas versus the cut nail variety used in the original building and the grain bin plaster lining.   From the early 1900’s until the late 1960’s the only significant changes resulted as repairs to rot and water damage caused by leaking roofs and foundations.  Only the extreme resistance that yellow pine heartwood has to rot prevented the structure from collapse.  The northwest corner second floor was redone using maple around 1931, as indicated by the presence of newspapers of that date under the flooring.   This floor shows staining and deterioration from water damage.  The supporting joist structure was also damaged.   The roof valley between the original building and the addition proved to be a constant leakage problem.  Many of the joists under this area were also damaged severely over time. 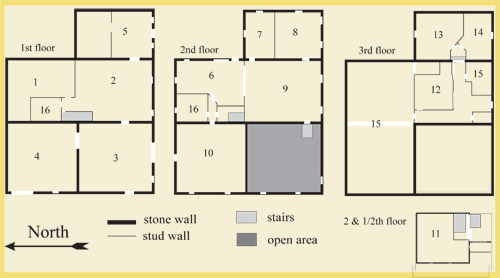 In 1967 Richard and Rilla Fulwider purchased the property.  They can be credited for the fact that the brewery still stands today.  They corrected the foundation problems, fixed the leaking roof.  They then installed several new floor joists to assist those weakened with rot, and replaced totally ruined wood support beam with a steel I-beam.  The kitchen and bathrooms were updated.  All the rooms in the original building and the first floor recreation room had paneling and drop ceilings installed.  Two fireplaces were installed, one gas, one wood (the house/brewery never previously had any).  Fulwider was also responsible for cutting a “garage door” opening into the first floor wall on the west side.