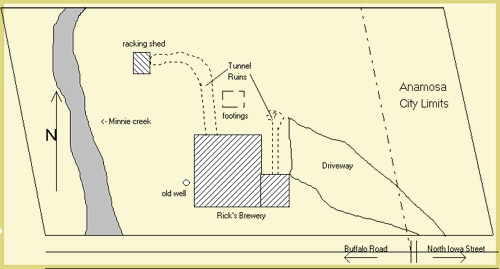 Current Use, Living in Rick’s Brewery today
The former residence brewery is now entirely residence.  There are nearly 5000 square feet of living space, 1000 square feet of unheated “historic quality space”, and an additional 1000 square feet of attic storage.  There are several interior stone walls that provide separation between different sections of the house.  This required the installation of intercoms to call children in the 3rd floor bedrooms to dinner on the 2nd floor.

Little remains of the racking shed that is shown on the site map.  The foundation walls that contained the aging tunnel exit from the hill to its east have been roofed over and made into a small utility shed.  When septic system work was done in 1996, several post footings from a barn connected to the shed were identified.  The well which was likely used to provide cooling water, is about five foot in diameter and 25 foot deep.  The top four feet of well retaining wall is constructed of limestone,  while the remainder is hewn out of the native bedrock.  This provided an easy clue that the brewery foundation is built right on bedrock.  This bedrock is only about foot to five feet down at the west side of the building.  A second encounter with six foot copper clad electrical utility ground rod, found that it does not pierce bedrock very good either (it is now five foot long).

Not much is known concerning the history of the remaining four plus acres.  When ever any digging is required, unusual items such as old bottles, clay pipes, and strange masses of rusty metal are found.  Several areas that must have been used as trash dumps exist, both along the creek and the old abandoned railroad right of way.  While attempting to build a pole based play house to the north of the house, the old remains of another building was hit.  This is the assumed location of an early stable or shed used in pre 1900 times by the lack of Portland in its construction.

The tunnel system seems to fascinate nearly everyone.  The first system built in the 1850’s was abandoned when the 1870’s addition was finished.  The current ground elevation seems to be located at the level of the former tunnel roof.  This tunnel was just filled in with junk and cinders.  Parts of the wall were found near the north side of the original structure when digging to repair foundation leaks.  The old door way through the wall can still be seen where it was filled in.  the newer tunnels were filled in around the 1940’s.  A visitor who lived here then as a small girl described the process of dynamiting and closing in the entrances.  The owner at that time was afraid of collapse and resultant injury to someone.  The location of the former entrance to this tunnel can be seen in the north wall where it too was walled over in the northwest corner of the garage room.